Hey! Missed me? I’m back with another blog, the first related to the Coding Period. Got some progress and interesting observation to share!

The first thing I did in the coding period, was analyse the problem and get a feasible approach to resolve it.

Problem: Find the complexity of the Legacy and LDM method.
Solution: Run some benchmarks and find the bottleneck step.

First I chose the Legacy method because if its simpler architecture. I ran some benchmarks varying the spectral range of OH and CO2 molecule to get similar number of lines. I kept parameters like pressure, temperature, broadening_max_width, wstep, etc constant to see the dependence of Legacy method on Spectral range.

In order to get similar number of lines, I created a function which will take the Spectrum Factory dataframe and select the target number of lines. But the issue with Pandas dataframe is that when modify the dataframe there are chances that the metadata will get lost and we will no longer be able to do Spectrum calculation. To avoid this we have to drop the right number of lines with inplace=True. So we will need to fix the number of lines and then we can proceed ahead with the benchmarking. Every parameter is the same except the Spectral Range. Full code here.

Earlier we assumed that the complexity of Legacy method is:
Voigt Broadening = Broadening_max_width * spectral_range/math.pow(wstep,2) * N

Thus I was expecting to have different calculation time for both benchmarks. But to my surprise the computational times were almost equivalent! I re-ran each benchmarks 100 times just to be sure and more precise about it. Following were the observations:

There are some inference we can make from the above observation:

A) The bottleneck step(Voigt Broadening) loosely depends on Spectral Range.
B) The complexity of Voigt Broadening needs to be modified because there is a difference of order of ~10 in the Legacy Scaled value of OH and CO2. 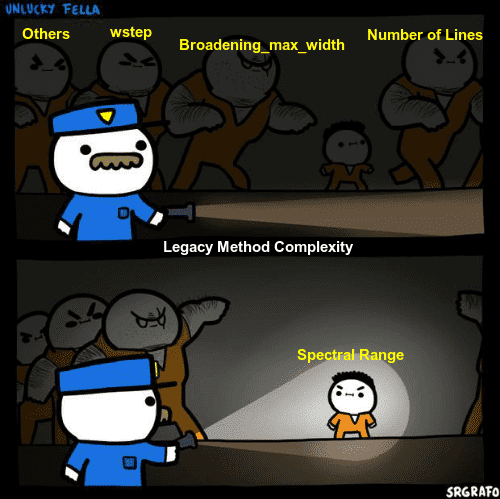 So in order to do some analysis, we first need data of different steps in the broadening phase and conditions of various Spectrum which brings me to the Code part in Coding Period.

The aim of this class is to replace all the print statements by a common start, stop, _print method. Earlier each step computational time was done using time() library. Now the whole codebase is being refactored with the Profiler class that will do all the work based on the verbose level. In addition to this the biggest benefit is that each step will be stored in a dictionary with its computational time that will help me gather data to find which step is in actual bottleneck and further which part of the function is the most expensive time wise. A simple example is below:

So using a common key we can make it happen. This will be stored in the conditons of Spectrum object in the 'profiler' key. All these Spectrums and their conditions can be exported using a SpecDatabase. This will create a csv file comprising of all the parameters of all Spectrums which will be useful in getting some insights. -> PR LINK

Based on several benchmarks, it is estimated that around 70-80% time is spent on calculating the broadening. The broadening part has the following hierarchy:

The whole process can be divided into 4 parts:

The complexity of each part comes out:

But inorder to prove this we need more benchmarks and evidence to verify this and it may involve normalization of all steps in lineshape calculation!

So the goal for the next 2 weeks is clear:
i) Refactor the entire codebase with Profiler.
ii) Find the complexity of Legacy Method with the help of more benchmark and analysis.
iii) Do the same for LDM Method!